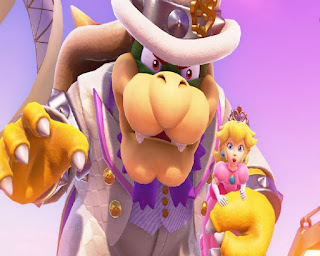 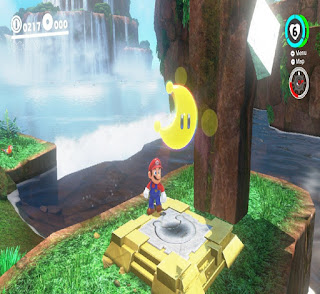 The game starts rather typical, Bowser takes away Princess Peach from Mario. This time he plainly states he wants to marry her... You think Mario would have married her by now to prevent this. Well anyway, like the other 3D games, your goal is to collect the new power moons. Instead of completing one large stage under different missions, you land on a open world and some of these power moons are hidden by a genius and you might never find them without help. Sometimes you have to defeat enemies or platform your way to it. 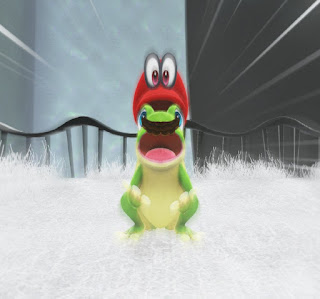 What makes this game different is Mario's new magic hat. With it, he can take over the body of different creatures. Frog here is super small and jumps way higher than regular Mario. 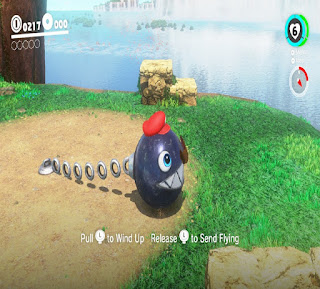 For the first time I can recall, you can actually control the classic and deadly chain-chomps. 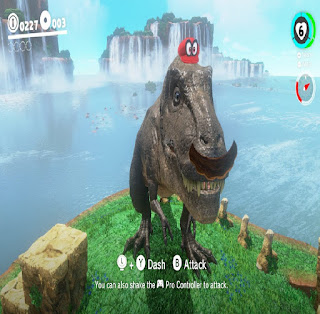 And the coolest by far, the massive T-Rex. Luckily the t-rexs are sleeping by the time Mario finds them. 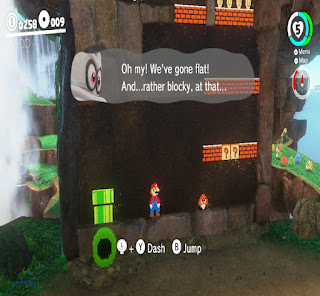 Overall it's been pretty fun so far, but hard to say after only about an hour or two how well it compares to something like Super Mario 64. I did like seeing this retro-throwback mini-stage. At least they haven't forgotten his roots.
Posted by Adam at 12:00 PM

I am disappointed that Mario never made an honest woman out of Peach.
Oh. Dear. Well, THAT was sexist.

That looks like fun, Adam. I haven't played Mario in years. My youngest granddaughter LOVES it! Diana