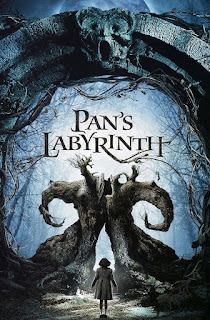 Pan's Labyrinth is a movie I heard of for quite some time now, but honestly I didn't know it very well. I almost thought it was referring to Labyrinth from 1986 with David Bowie and Jennifer Connelly. Instead it was made over a decade ago by Mexican director Guillermo del Toro, and unlike his Hellboy films and Pacific Rim, this movie was shot with Spanish actors in Spain and yes, they all speak Spanish and not English in the film. I've seen many movies (especially Japanese) in a foreign language and it doesn't bother me. 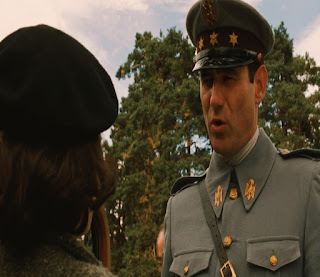 The film is set during the early reign of fascist dictator Francisco Franco in the year 1944. You never see the horrible man, but rather a few of his many minions. A young girl named Ofelia travels with her mother to meet her new stepfather Captain Vidal for the first time. However this isn't a good time for family bonding, as they are at a military station, and her stepfather is a ruthless commander who wants nothing more than to eliminate all the leftist rebels hiding out in the woods. Ofelia doesn't seem to care about the current politics of her country Spain, but rather the health of her mother Carmen. 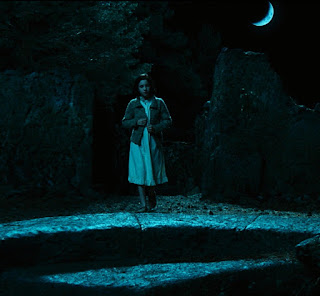 While exploring, the young Ofelia discovers a rather neat labyrinth. There she meets a faun, a mythological creature who claims Ofelia is a lost princess. He explains that she was Princess Moanna, who many moons ago had left the magical kingdom and died in the real world. The Faun believes that her soul was reborn as Ofelia and that she could return to the world of magic one day. However the quest will not be easy. To get back to the magical kingdom, Ofelia must undertake tasks to make enough magic to get to the new world. However they won't be cake-walk, as monsters lurk in the magical world and her cruel stepfather makes life hell for many in the reality. 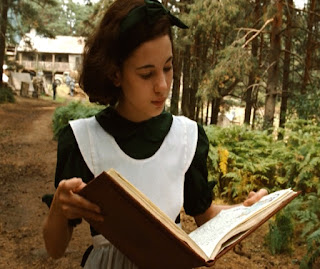 Overall I liked Pan's Labyrinth, but it does have some flaws. I like the setting of the Spanish Civil War as it feels very Tarantino-like, and the magical world almost reminds me of Tim Burton but even darker. While the name of the movie and other things might suggest this is family-friendly, it's not even close. That being said, what I found that I didn't like is that the magical world doesn't make a lot of sense to me. Also Ofelia's character shouldn't be as strong emotionally as she is in the movie, as she's brave enough against things that would make grown-men run for the hills. There was talk of a sequel movie but that got scrapped, but I'm not bitter over it. After such an ending, it's hard to think of extra story to it. But I will say that Captain Vidal is one of the most fearsome villians ever.

Never heard of it! Probably because I didn't use the Internet in 2006.
Sounds and looks good!

I remember watching the movie but I can't remember much of the plot.

I want to see this! We watched "Bridge of Spies" last night, and it was great! Happy weekend, Adam!

I would have given this one an "A," but it might be a bit too surreal for some tastes.

I haven't watched it, but your review is great!!
I just followed you from Tokyo :)

I loved this film and this girl seems very real to me because she is spunky, strong and loving. There are some truly horrifying scenes( Don’t eat any fruit at that table!) The fawn looks devilish actually and you can’t help but feel an unease around this but that step dad is just a evil bugger

I was traumatized for weeks after watching this