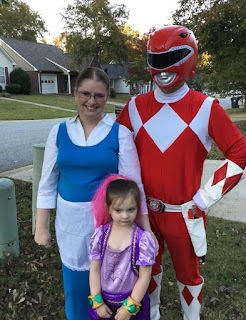 Like always, we celeberated Halloween as a family. My brother Zach was Jason Lee Scott who was the first Red Ranger from Power Rangers. My sister-in-law was Belle from Beauty in the Beast in her normal dress. My neice Little K was Shimmer from a Nickelodeon Jr. show called Shimmer and Shine. I don't know much about it, but the character is like a genie. 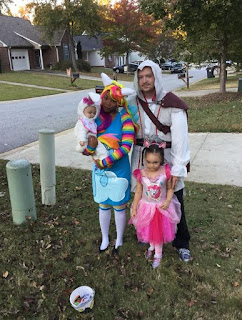 My brother Brandon was Altair Ibn-La Ahad from the video game series Assassin's Creed. His wife Terry and my niece Little Iz had a My Little Pony theme in their costumes. My baby neice Little was a bunny rabbit. 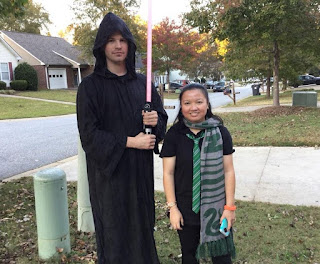 My wife was a student at Hogwarts under Slytherin House.  Her scarf is covering up the emblem, but the scarf, polo, and necktie are all Slytherin themed. I was a Sith Lord from the Star Wars universe. I was a Jedi last year and since my light-saber changed colors, I figured I could go Sith this year. I'm not technically trying to portray any Sith Lord from the movies, but a original one inspired by The Knight of the Old Republic video game series. We'll call me Darth Neko. 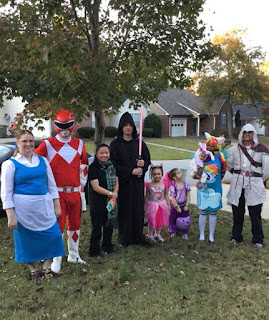 Overall I would say this probably our best costumes yet. Just wished we had taken these pictures when it got a little darker, the lightsaber is rather weak in the sunlight.
Posted by Adam at 5:00 PM

I like what you all did, it was always fun for us to dress up for Halloween, you all did a great job with the costumes.

The saber still looks pretty bright. It's so great that you do this as the close family you are.

I love all yours costumes Adam!! Looks wonderful and the kids are so cute !! fun!!!

Great costumes, I dressed as a banana once.

Very creative costumes and looks like great thought went into it all. Nice family and photos. Greetings!

What fun. My little granddaughter is fascinated by Shimmer & Shine, too. xo Diana

You all look smashing for sure

I love it! The costumes turned out great!

Great fun as a family. Keep on doing it.

How wonderful! I love all the costumes. It's such a fun thing to do as a family.

That's so good.
Love the costumes.

Love how the adults get all dressed up too!

I love these photos, Adam!

I think it's great that the entire family gets into the theme of Halloween and really dresses up. What a fun and safe way to spend time together. Those costumes are pretty creative, too. Love the pictures! Hugs...RO