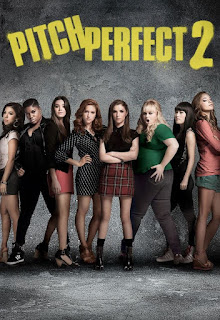 Not long ago, my wife and I watched the original Pitch Perfect. I thought it was good, but certainly nothing amazing in my book. However my wife Daisy LOVED IT and of course it didn't take long for her to beg me to let her see the sequel so quickly. I did hear the sequel wasn't quite as good (as sequels often are) as the original, but how much did quality drop here. Was I still going to like the 2nd Pitch Perfect? 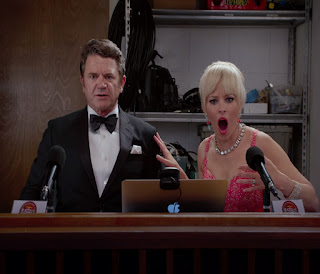 The movie takes place about three years after the events of the first movie. The Barden Bellas have gotten so popular that they are even able to perform for President Barack Obama on his birthday. Though during the end, Fat Amy has a "problem" with her clothing and everyone sees far too much. The college is absolutely horrified and embarrassed by what happened and decides to pretty much stall any progress for the Barden Bellas. They have a bunch of new rules which limits competition, and they can't even recruit new members. However they are given a challenge that if they win a world competition (hosted in Denmark) then they will get their rights back. 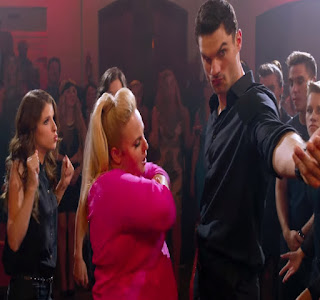 Their main rivals in the world are Germany's Das Sound Machine led by a "perfect" woman named Kommissar. When they first clash in practice rounds, they just don't hold up to par. To make matters worse, team leader Beca Mitchell is more worried about rising through the ranks of her new internship since she'll be graduating college soon anyway. Their only hope is the new girl Emily (who was able to became a Bella through a loophole) who writes her own original music instead of doing a cover of popular music. 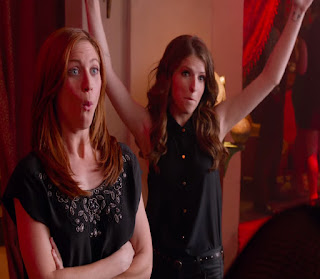 Overall I will say Pitch Perfect 2 is about the same as the first, perhaps a little worse. The humor is worse than the 2nd film but the music and character relationships are better though so it kind of evens things out for me. I will say that Daisy seemed to have no problems with it and asked "is there a third film?" which I dumbly told her that yes there is a third film that's supposed to hit theaters soon. I like these movies enough to watch them at home, but I don't think I want to see them badly enough in theaters.

I haven't seen any of these...I don't get to the theaters much anymore. Mr. Sweet and I used to go often.
I thank you so much for your visit...and I am pretty sure, a little later when I learn to breath again, I will paint that little ugly table...but I'll never get rid of it...somehow, I have attached it to Mr. Sweet so much that I think he might be smiling down at me and saying, "why are you wanting to keep it, you always thought it was so ugly?" lol

You are right. Sequels never match the original.

I haven't seen the original or the sequel and I might only see it if it is on TV and nothing better is on.

I liked the first one and thought the second one was just....weird.

love the first one..can't even remember if I saw the second one.

LOL I enjoyed the review, but I got a bigger kick out of you and Daisy and movies. My husband watches movies he'd never choose because he's married to me, and about half the time it's my turn to choose. Movie theaters are becoming so expensive! We nearly always watch movies at home.