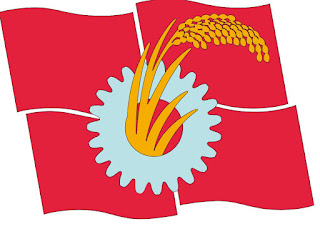 I've always been a fan of history, and I remember getting into an argument with a kid in high school about Japan's government. He told me that Japan was a communist country (China, Vietnam, Laos have been for many decades now) which wasn't even true and he wouldn't believe me. This was a bit before everyone had a smartphone (graduated high school a year before the first iPhone) to easily settle these debates.

But since World War II, Japan's government has been more-or-less babysat by the United States government, and they would had never allowed a real communist government to form in the Cold War even if the people voted for it. Japan had a far-right political party called the Imperial Rule Assistance Association become the ruling party during its World War II era, and since Japan's defeat the country has been ruled (with brief exceptions in election losses) by a centre-right party, though Japan's policies on guns and health care are more "left-wing" than the active policies of the Democratic Party here in the United States. Japan (like almost every other country with free elections) does have a communist party but they have never been in power and only elected a small amount of politicians who could never have a chance of forming any real governments anyway. It always irks me when people get history so very very wrong.
Posted by Adam at 12:00 PM

In my experience, people lump a lot of the Asian countries into one category, not bothering to see how different they are.

I had a similarly annoying argument once with my aunt. In 1972, during the Canada-USSR hockey series, she wondered what CCCP stood for on Russian hockey players' jerseys. I told her it was USSR in Russian. She insisted I could not possibly be right, but of course I was.

It must also frustrate you that there's so much wrong history being spread on the Internet. I always check multiple sources when I want to learn the truth about something, and "truth seems to be under attack lately.

I have to agree with Jenn, that a lot of people lump a bunch of countries together and don't pay enough attention. This was good to know.

It's so easy these days just to look up the info on the internet.

most people can't look at an Asian person and tell if they are Chinese, Japanese, Korean or what have you.

There's so much misinformation. People should really take the time to get their facts straight. At least now it's more easily accessible.

Your comment about the iPhone made me laugh, Adam. The year I graduated from university we were still using slide rules. That year they allowed a small group of engineering students to use the first calculators in a class. Time have truly changed. As for history, it's check, check , and check multiple sources ~ So much misinformation out there! Have a good one!

Japan a communist country?! I always thought there was something subversive about Toyota and Sony flooding US markets with their products.