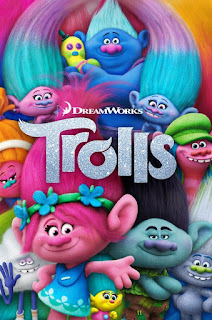 When I hear the word troll or trolls, my mind immediately thinks of the mean people lurking all over the web. But I often forget that long before I was born (Trolls were created in 1959), trolls were dolls that were popular with girls (though they tried hard to make "boy" trolls) especially in the early 1990's. To be honest, I thought the troll dolls were stupid and kind of creepy. However Trolls from Dreamworks came out last year, and apparently was quite good. I heard it was one of the movies my young niece demanded her parents get for her.  So how good was this movie? 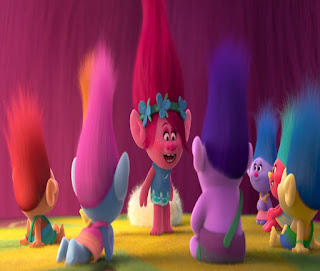 The movie is about two sides of "monsters", you have the tiny happy little trolls. They are all bright and colorful, and almost all of them love to sing and dance. However a race of monsters called Bergens, are quite unlike the trolls. They're ugly, are rather dull in their color, and are mostly miserable. The Bergens find out they can be "happy" after eating a troll. They create a holiday called Trollstice where the Bergens feast on a troll and for one of the year they are "happy". However after the young Prince Gristle tries to devour his first happy troll, he spits it out discovering it to be fake. The King of the trolls led his people and they escape from the Bergens. 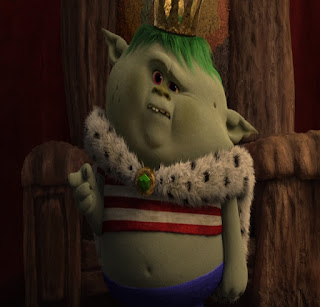 About two decades later, Prince Gristle is now King Gristle and he is totally hopeless about becoming happy. A chef who was blamed originally for the trolls' escape however discovers where they ran off to. She ambushes the troll town and takes a few of them hostage. She tells the young King Gristle and he is very optimistic about the future now. However Princess Poppy of the trolls vows to save her friends and to prevent any of her kind from being food ever again. However when such odds against them, will they get off the menu? Overall I really liked Trolls but it's not quite as good as most of the Pixar films but Dreamworks made this likable for all ages. so I can see why one of my nieces adores this film, It's cute, gets dark (to an extent), has a great cast of characters, and just has that feel-good tone to it. I hear they are making a sequel for 2020, and both my wife Daisy and I are looking forward to it. While I thought it could of been better, I was a bit shocked to learn that it was not even nominated for the Best Animated Film category at the Oscars, though 2016 was a good year for animation and Trolls certainly was not quite as good as the eventual winner Zootopia.

I agree with Seaborne, it does look like a fun movie.
What year were you born in?

It was a fun enough one indeed

If I had a grandchild I might take them to see this, but I'd need a few stiff drinks to watch this on my own.

I heard years ago that trolls were really good luck, so I went crazy finding a bunch of them to add to my toy collection. When my son graduated from High school, he even got a Graduate Troll that I can tell he didn't really care about. (lol) This is on my list, and I plan to check it out soon. Thanks for such a great review! Hugs...

I had one way back when!!

I had a huge collection of them back in the day. Wish I still had them. I thought the movie was cute.

I loved it and so did my gg's

I haven't seen this movie, but after your review, I will try to catch it on cable.