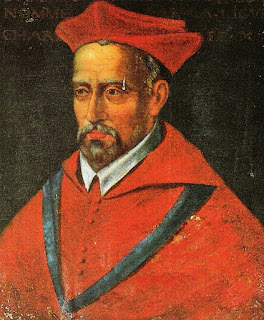 When the House of Valois became extinct on the male line after the death of Henry III, the House of Bourbon were next in line to become King of France since France only allowed the line to be inherited through direct-male lineage. Since the top Bourbon heir Henry of Navarre was Protestant, the Catholic League (formed in opposition to Henry) tried to declare Henry's uncle Charles who was a Catholic cardinal as the true king of France. Henry took the throne as Henry IV but calmed the Catholics who hated him when he officially converted.
Posted by Adam at 12:00 AM

That is interesting. I learn something every time I come here. Have a great day.

I've always thought it was interesting how religion plays such a big part when it comes to politics, even now:( Anyhoo, that was a shrewd move that Henry did.

Religion takes a backseat when a throne is involved.