Fact of the Day: Kazakh Soviets 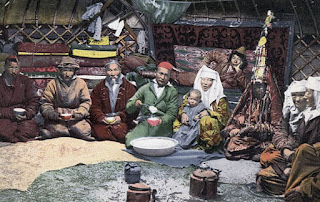 Kazakhstan while not as a big or well-known as Russia, was part of the Soviet Union. The native Kazakhs suffered greatly in their early days in the Soviet Union. When famines hit the nation, its estimated that 40% of its native people either died of starvation or fled the country.
Posted by Adam at 12:00 AM

That is awful. How tragic!

That's so sad for all those people! Hugs..RO

My niece was adopted from Kazakhstan she was an orphan.

Such a sad thing.

Awful indeed. Rather flee than starve.

I am appalled with the ignorance of Americans on this subject..............no wonder you get the likes of Turnip Top.
Oh dear.......the US Ambassador to the United Nations like
Secretary of State, Rex Tillerson, might soon be looking for a new job.............then again the State Department might move an impeachment of the baboon.
The comedy from Alabama is Oscar winning............horse riding to polling stations and having six-guns strapped on.
John Wayne must be spinning in his grave.

The antics of the Royals way back in Europe pale into insignificance when compared to the 2017's of the USA!