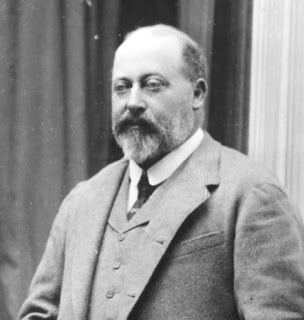 King Edward VII of Great Britain was originally known as Prince Albert Edward. It seems his mother originally intended him to rule one day as King Albert I, but he felt that it would diminish the name of his father Prince Albert and that his father's name "should stand alone".
Posted by Adam at 10:37 AM

I love this, what a way for him to keep the legacy of his father in a special way.

That's an interesting tidbit of info.

Read a bit more about this playboy!
Here:
Edward gained a reputation as a playboy. Determined to get some army experience, Edward attended manoeuvres in Ireland, during which he spent three nights with an actress, Nellie Clifden, who was hidden in the camp by his fellow officers. Prince Albert, though ill, was appalled and visited Edward at Cambridge to issue a reprimand. Albert died in December 1861 just two weeks after the visit. Queen Victoria was inconsolable, wore mourning clothes for the rest of her life and blamed Edward for his father's death. At first, she regarded her son with distaste as frivolous, indiscreet and irresponsible. She wrote to her eldest daughter, "I never can, or shall, look at him without a shudder."

You can see all this on a excellent video on the Life of Victoria and Albert - naturally produced by the UK film studios. They know how NOT to distort history.
Colin

I reckon he didn't want to be know as King Albert for the simple reason that his conscience would not allow it after his father's death due to his philandering.
Colin

New this as I've been watching a fair bit of history on the Royal Family.

I read that this was the son Victoria hated and blamed for the death of her husband, Albert.

You have so many interesting facts.