Fact of the Day: King Franco 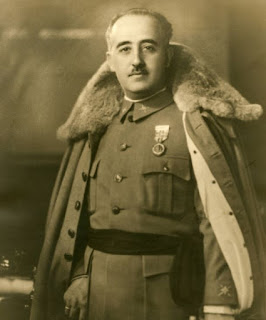 When Francisco Franco overthrew the left-wing government of Spain during the Spanish Civil War, he was able to do this partly over the support of monarchists whom Franco was officially a member. They wanted to restore the Spanish monarchy, however Franco only officially restored it but Spain didn't have a king when he took power. He named himself regent for life, enjoyed the life of a king, but did not carry the title of King of Spain.
Posted by Adam at 12:00 AM

That's interesting. He was kind of a regal looking man. Hope you and Daisy are getting ready for a Merry Christmas. Hugs- Diana

One way to do it, just name yourself it.

...and then he returned the monarchy!

As I travelled to Spain when the Generalissimo was in power, no country on earth was safer!
He did save Spain from absolute anarchy and communism of the worst version.........Stalinist!
Colin

I just remember the running joke about him on SNL..