Fact of the Day: Leonid Khrushchev 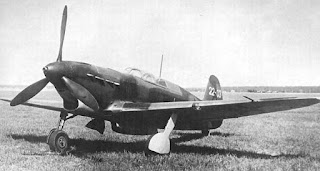 Leonid Khrushchev was the son of Soviet Union leader Nikita Khrushchev. He served in the Soviet Air Force during World War II where his plane was shot down under mysterious circumstances. A popular theory is that he was captured by the Germans and worked with them.The theory also states that when Stalin found out, he had him executed. The theory is often used to explain why Khrushchev was so anti-Stalin after he assumed power.
Posted by Adam at 12:00 AM

Have to love a good conspiracy theory

When I see stories like this, it makes me want to find out more of the history behind it. Very interesting Hugs...

I remember the father but didn’t know about the son.

Interesting. I've always assumed Khrushchev's animosity towards Stalin was moral and not personal, but who knows?

So from this "snippet" of WW2 and Soviet history, the latter subject to plenty of conjecture on truthfulness , I presume Junior Khrushchev survived the war, returned to Russia and then faced a wall? Bang Bang!
A falling out between mass murderers..........oh dear how sad.
Colin

Sounds intriguing. Unfortunately, far too many people disappeared under mysterious circumstances during the Stalin era.

First time I hear of him. Interesting story.