Fact of the Day: Marranos and Moriscos 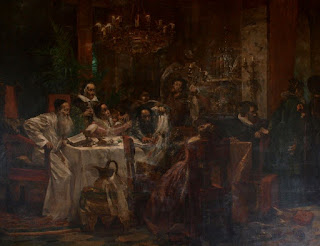 When Catholics took over a Muslim Iberian Peninsula (present-day Spain and Portugal) they did not allow the freedom of religion. The Muslims and Jewish people who remained became Moriscos and Marranos but they were forced to convert to Christianity. Though most of them still kept their old religion in secret.
Posted by Adam at 12:00 AM

Wow, I didn't know that.

Thanks for sharing this! I always learn something new.

Many religions are and were much more accepting than Christianity.

Yes, the Jewish people were expelled from Spain in 1492 on pain of death. Many were tortured and killed in forced conversions. This is why their ancient home of Israel is so precious to the Jews: SAFETY and belonging!

Yes, but Buddhists mobs (Buddhist!) have persecuted Muslims in S.E. Asia...and we all know about Islam at war with itself. . . .

The state religion of any nation is almost always very bad regardless of who is running the show, unless there is true freedom of religion. Like the Shintos of Imperial Japan, Buddhists of S Asia, The church of england during the Tudor/Stuart days, Catholic church in the middle ages, etc etc

That is interesting, I must read more about this!

This is not surprising...

I am not surprised by this at all and it is so typical and very sad.