Fact of the Day: Paul Brown 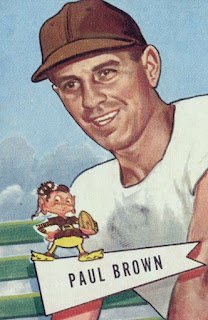 The NFL team the Cleveland Browns are named after Paul Brown, who founded the team and was the original head coach. While a great innovator in the sport, he was not well-liked. He was eventually fired, and he went to go on and found the other Ohio NFL team the Cincinnati Bengals.
Posted by Adam at 12:44 AM

Email ThisBlogThis!Share to TwitterShare to FacebookShare to Pinterest
Labels: fact of the day, Football, NFL, ohio

Great post! This guy was brilliant, and created so many things as it relates to football today. It's just the pits that he had this over the top "A" type personality, believing his ideas were the only ones that mattered when it came to the game, causing his own team dissension and frustration.

Sounds like he knew what had to be done, but just pissed off everyone

I know little to nothing about sports!

What can brown do for you?
Apparently, can your behind.

I don't follow sports so this is news to me.

I mainly follow hockey but still an interesting tidbit.