Fact of the Day: Queen Politics 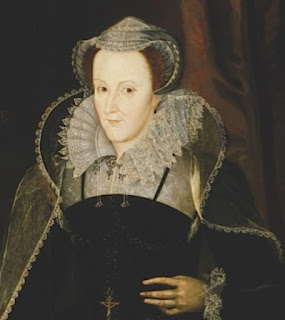 When Mary, Queen of Scots was found to have worked with conspirators to commit regicide against Elizabeth I of England, it left the English queen in a bit of a predicament. Any lesser ranked person would be executed without a second thought, but Elizabeth feared the backlash. While Elizabeth ordered her death anyway, her ultimate concern was that Mary's son King James VI of Scotland (who was ironically Elizabeth's heir and eventually successor) would ally with a foreign power against England in revenge.
Posted by Adam at 12:00 AM

It's the way of kings and queens d0 things, repulsing.

The joys of royal politics

Agree with the comment above...that's GoT stuff right there!

What would life be without politics, right?

Same as it ever was....
I hesitate to admit how childish I am, but the first thing I thought of was the Mary Queen of Scots sketch from Monty Python.

So many of the royalty back then appeared to place little value on life outside their own.
Mary's son's revenge....karma.

really like Game of Thrones, anyway I find interesting all this!

I, too, think of Monty Python...bad I know. Politics has always been ruthless

Elizabeth was right to worry about this.

1st cousins once removed, Mary I of England was her half sister not Mary Queen of Scots

should have killed her much earlier.