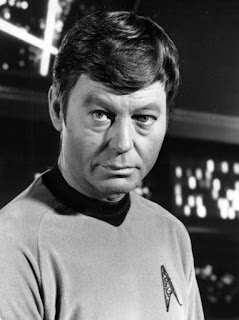 DeForest Kelley was best known for his portrayal of Dr. Leonard McCoy on the original Star Trek series. While never a real doctor in life, he was deeply interested in the medical field. He admitted how proud he was when many fans of Star Trek told him that they became doctors after being inspired by his character.
Posted by Adam at 4:00 AM

Email ThisBlogThis!Share to TwitterShare to FacebookShare to Pinterest
Labels: fact of the day, star trek

It's really nice that he inspired people that way.

Great that he could inspire indeed

A good legacy to have. Merry Christmas.

He was great. I loved him!

This is so cool. I used to love watching Star Trek as a kid. Have a wonderful Christmas, Adam and Daisy! Happy Holidays from Hawaii.

I think Kelly and Leonard Nimoy were really the two indispensable actors on that show. Don't get me wrong, William Shatner was good, but you could have had another actor in that role (such as Jeffrey Hunter) and it wouldn't have made that much of a difference. It would have with Kelly and Nimoy.