Favorite Quotes: Anyone Can Be President 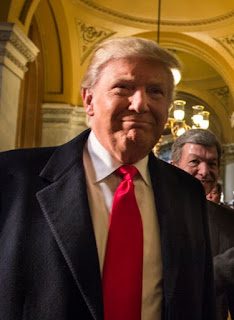 "In America, anyone can become president. That's the problem."

I always loved George Carlin, he was calling things for what they were, even stuff that happened after he died. That quote never became truer than on election day last year. Have to imagine what our friend George Carlin would be saying about Mango Mussolini if he were alive to criticize him.
Posted by Adam at 12:00 PM

Im pretty sure you have to be rich too.
Lisa

Hi dear, do you mean it`s problem? In Russia it`s impossibile. USA is free coutry I mean, with equal opportunities

Seems in the USA that the zoo fraternity can move in!
Turnip Top ------------ what a baboon. (Sorry to the monkey
family for calling the lunatic one of your family).
Colin

Well, he'd certainly have a lot of material :)

Like most comedians, Carlin would be having fun with Trump.

Ol'Buzzard has a whole post on George Carlin's quotes.