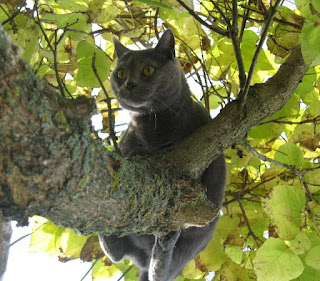 "Cats are like libertarians, they don't believe in government, until they get stuck in a tree,"

As I mentioned before, I think 99% of Libertarians are delusional when it comes to governing, but hey when you don't technically have any seats in any government, you can blab whatever you want. While she lived a bit before Libertarianism really became a thing in America, author Ayn Rand was all about their platform. Almost no government, no handouts, and all about the success of an individual. That's until she went broke after her medical bills got too high, and she was forced to swallow her pride and go on social security and Medicare. That's why we call it social safety nets. You might call an acrobat brave for not using a net to catch him if he falls, I call him crazy and totally deserving of his fate if he slips up.
Posted by Adam at 12:00 PM

Ahaha, this quote is so funny!

OMG that quotation is SO accurate, both for cats and libertarians!

Didn't know that about Ayn Rand.

While I have some libertarian leanings (e.g. victimless "crimes: shouldn't generally be illegal), there's a clear need for social safety nets.

HAHA! That is a funny quote!

A little unfair to cats since they don't understand what they're doing whereas humans do but it's a valid comparison! :) I'd probably change it to, "Libertarians are like cats", though, as I think that order fits better.

That quote is priceless!