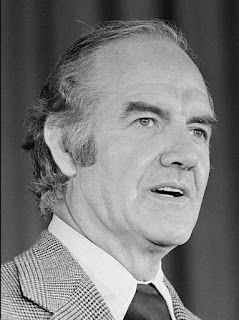 "I'm fed up to the ears with old men dreaming up wars for young men to die in."

George McGovern might not be a familiar name to many millennials, but he was a sane man in some crazy times, for example he lost badly to Richard Nixon because people of that time thought Nixon was the "better" man. If it wasn't for decades of anti-war activism, I'm pretty sure George W. Bush would have drafted men of my generation into the wars in Afghanistan and Iraq. Like Vietnam, those were two wars created by old men that sent younger men to fight for their own desires.
Posted by Adam at 12:00 PM

Oh yeah, I remember this guy.

I love George McGovern, my type.

Wars have always been thus.

Should just shot the old farts that come up with the war and call it a day.

Wars are ghastly and should be avoided at all cost, especially today with nukes involved.

He was an idealist but we'll never know if he could have ended the Vietnam disaster quicker...........or at least without the humiliation of the US defeat.
Colin

I remember him because that was the first election I was eligible to vote in. I'm pretty sure I voted for him too.

I do remember McGovern, good quote.

I do remember McGovern, too! Wow-I thbk politics follow us our whole lives!

I remember him well, and I think I even voted for him.

That is a good quote. So true.