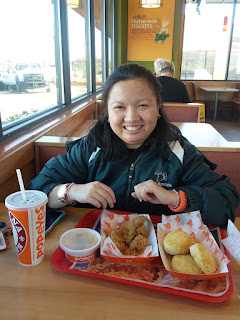 As I mentioned before, my in-laws don't live far at all from my work. So I took Daisy to Popeyes which is the 2nd most popular chicken restaurant in the United States. Despite its popularity, we rarely have them in South Carolina. This is the first one I can recall in our county, though its rather new. I heard mixed things from my co-workers, my co-worker Pat refuses to eat there after a few bad experiences. Daisy really wanted to go (she had some last at an airport in Dallas, Texas) so I figured I would rather attempt to make her happy. We had no problems at all. The table was clean, we didn't have to wait long for our food, and the food was good. I will say people aren't lying about those Popeyes biscuits making you thirsty.
Posted by Adam at 5:00 PM

We have Popeyes all around where we live, which is great coz all of us like the food there:D Those biscuits are so bad for you but sooooo tasty!

Oh Popeyes!!! One of my favorites!

We don't have any Popeyes around here.

Had it one time and thought it was gross. However, the one that we have here is always busy, so what do I know?

We have Popeyes in Hawaii. Haven't gone there in forever though.