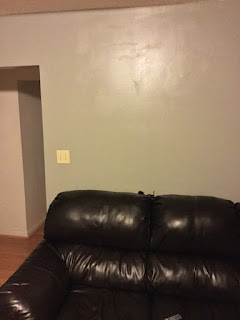 Being a home-owner, painting is a reality. It took me well over a year to get around to painting the living room. I wouldn't say I "hated" the color that the previous family chose but it certainly was not something I was loving. It really is a grey, but it often looks really blue-gray and sometimes even grayish-green depending on the light and camera with the pictures. Grays typically do this and I hate gray colors (too depressing in my opinion) so I went beige in the neutrals. 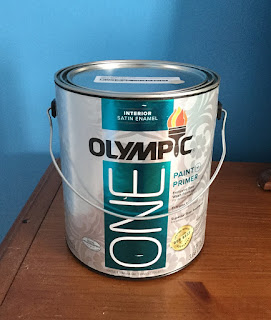 I used Olympic One Interior Satin Latex Enamel. I used it to paint the garage white and the bedroom blue, and I had good luck with it. So I wanted to use it again. I wanted a satin sheen as it doesn't show nearly the imperfections as the glosses, but still is very durable. I'm not a fan of flat paint. I also assumed they used low-grade paint when they painted it gray, and I wanted that covered over before it became a problem. 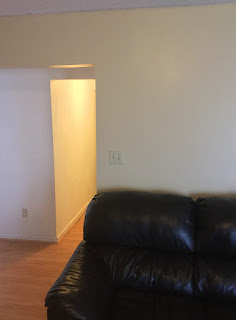 We chose the color Oakwood Manor (1095) by Benjamin Moore and had it color-matched in the paint we wanted. I liked the way it looked on the walls, much better than the funky gray we had. The color is fairly light, and the gray was darker than it looks in the picture. So it took two good coats this time to get it to cover over. But I usually try to do two coats anyway because you will miss a spot regardless when a roller runs dry. But it took me quite some time to paint the living room, but I only used a little over a gallon. So I have a good majority of a gallon left. So I will most likely paint the hallways the same, but that's a task for another day.
Posted by Adam at 5:00 PM

It looks good! Beige is a nice neutral cover. Just a gallon for the living room? Wow!
I don't like flat paint either.

I think beige is an excellent neutral colour, and we like the satin sheen finish too.

I like eggshell..it's not a flat and not a gloss..

You're making quite a number of improvements to your home.

Painting is definitely one of my least favorite things to do.

Good for you, I like beige, grey can feel cold.

Good choice is beige, anything goes with it.

I actually love grays on the walls, but beige is good too. You can easily decorate without color clashing when you go with a nice solid beige color.

Looks great! We always choose a satin finish. It not only looks nice but it's also decently washable.

A nice color..and it's good that you are choosing colors that you and Daisy like....makes it feel more like YOUR house.