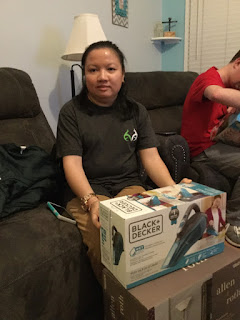 This Christmas game has many different names, but it's most official one is called White Elephant. Basically everyone gets a wrapped present(s) for the game, and you choose a gift at random in order or you can take one that has been unwrapped once your turn is called. Daisy ended up with a cordless hand vacuum (not very powerful but convenient) and a lamp as my mom had gotten these both to go together. 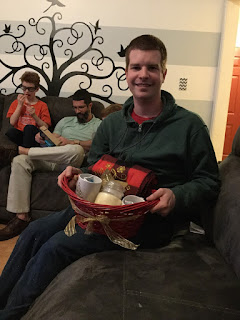 I was the last person in the game (the 2nd best place, as the first place person gets a chance to trade any gift they desire at the end) so I had a pretty good look at everything. My sister-in-law Amber had gotten one of those retro-remake Atari 2600 systems for the TV, and my nephew Mr. C was guarding it. He doesn't know that Atari 2600 games aren't very good by today's standards and since I've played most of them I passed on it but not without pretending I was going to rip it out of his hands. So the only thing that looked appealing to me was this basket my sister-in-law Tiffany came up with. It's got a blanket, two mugs, cocoa, chocolate, and a candle.  Daisy did try to take my blanket when all was said and done. That was the main reason I took it.
Posted by Adam at 3:00 PM

I remember doing this type of gift exchange at work one year, it was fun. I forget what we called it! Looks like you both ended up with great gifts!

Sounds like a fun game! And I really like the gift you got. We were going to play something like this but settled on drawing cards with the highest number choosing first.

Sounds a good game, and both of your gifts look good.

Fun, and your gifts sound great.

That is a fun way to exchange gifts. Both you and Daisy ended up with some good gifts.

You had a good working strategy. Happy New Year.

Something new to me and not a bad idea actually.
Happy New Year to you both.

Tried doing this as my daughter's birthday party and none of the kids wanted to trade their picks. They all loved what they ended up with. Looks like you and Daisy got some very practical gifts!

Wow. The best white elephant gifts I've ever seen! I once got a Chia pet!

Id have that blanket and cocoa over the Atari any day!
Lisa

This is a fun game to play, we were talking about doing it next year with everyone bringing gag gifts.

we call it chinese christmas...I got a himalayan salt lamp..which I call my saltlick lamp