Fact of the Day: Obama vs Trump on Golfing 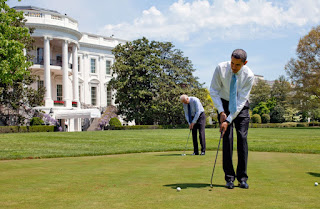 Despite criticizing Barack Obama for golfing so much during his two terms, in their first calendar year Obama had golfed 27 times, Trump had done about three times that number. Trump numbers are hard to verify as when he stays at his own resorts, they don't make the golf outings known to the press. Most estimates range from the upper 80's to the lower 90's.
Posted by Adam at 12:00 AM

Well he probably can't count that high without an assistant handy

I could never get into golfing, but I do like putt putt because it's over so quickly, and I don't have to worry about walking around in the heat to find a ball.(lol) Hugs...and Happy Saturday. RO

There sure is a lot of golfing going on.

makes me want to beat him with a 9 iron

Isn't it the absolute craziest thing? I was almost getting numb to all the ridiculousness of the Trump presidency, but then I hear something new.

Does trump do anything that's close to presidential?

I tried golfing but wasn't terrible at it. I did like the walking around the golf course though. : )

1. Turnip Top had when he was running for the Presidency and the Americans could not see a FAKE, complained about Barack's trips to the golf courses.
2.These as now pointed out are lies...........or is that FAKE news?
3.Also President Obama did not own his own golf course resorts and he most likely paid his GREEN FEES.
4. This "Lunatic" that you have as "YOUR LEADER who has a BIG BUTTON" has spent more times OUT OF 1600 Penn Ave. than in it.
5.He is a disgrace and impeachment MUST happen before he embarrasses the USA any more. No country wants him anywhere near them, no-one can afford the "IDIOT" and his "BABE DOLL MOLL".

I know what I would like to do with a golf ball and TURNIP TOP and it is unprintable but TRY and use your imaginations.
Colin

Does this have anything to do with the subject above.
I doubt if Turnip Top plays Putt Putt golf but then again he should it is more childish.
Colin