Fact of the Day: Phil Robertson and Roy Moore 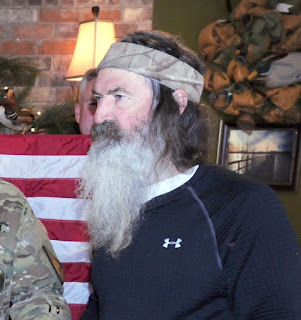 Duck Dynasty patriarch Phil Robertson and disgraced former Alabama Supreme Court Justice Roy Moore have more in common than being Evangelical Christians who support the government endorsing and forcing the Christian religion (any way they can legally get by with) down to all its citizens. Phil Robertson strongly endorsed Roy Moore during his U.S. Senate race which he lost due to allegations that Roy Moore preyed upon girls younger than 15 in the past. Phil Robertson dated his wife when she was 14 and he was 18. In 2009 he spoke to a group at a Christian retreat, and he said for them to find a good Christian girl and to marry them at the age of 14 or 15 before they reach the age where they become gold diggers.
Posted by Adam at 12:00 AM

Email ThisBlogThis!Share to TwitterShare to FacebookShare to Pinterest
Labels: Alabama, Christianity, fact of the day

I’m sorry but I can’t think of anything else to say but “assholes”!

Yeah, they both need to go fall into a hole somewhere and never get out.

Hmmm.....these people claim to be religious, love their guns and think 14 is a good age for a girl to date plus more.....typical. I bet they wish for the perfect Stepford wife and would love more wives...they make me sick

I recently read an article about southern Evangelical Christians and this is apparently their standard view about when marriage should occur. Dating young girls is called "courting" or something.