Fact of the Day: Sit and Kneeling Football 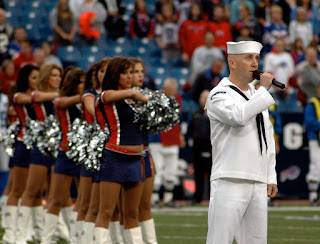 While there is outrage from the right-wing on NFL players kneeling during the national anthem to protest racial injustice and police brutality, it originally started a bit differently. Colin Kaepernick started the protests by sitting down during the anthem, not kneeling. Kaepernick decided to kneel after talking to NFL player (and U.S. veteran) Nate Boyer who suggested a more respectful form of protest than sitting.
Posted by Adam at 12:30 AM

Despite anger from so many, and joy from others, it also caused a discussion. Hugs...

Sure brought up issues one way or another indeed, not that anything seems to ever be done.

I imagine most people sit through the anthem when watching a game on TV at home, though of course they're not protesting.

Did you see the most recent cover of The New Yorker magazine? Martin Luther King taking a knee along with Kaepernick and other players. Very powerful.

I had read that. It's too bad so many people are missing the point on this issue.

My only way through this ugly controversy is to focus on MLK Jr. and the work of other civil rights leaders.

Adam, when you have a little time, do read this post from Margaret and Helen. Helen is the person writing and she is hilarious!
https://margaretandhelen.com/2017/09/25/you-know-whats-really-dispectful-to-the-american-flag-a-confederate-flag-takeaknee/
It's amazing how fabulously eloquent she is.

I think another form of protest should be looked at.
Irrespective of your views, disrespect for a National Anthem
is not appropriate.
Colin