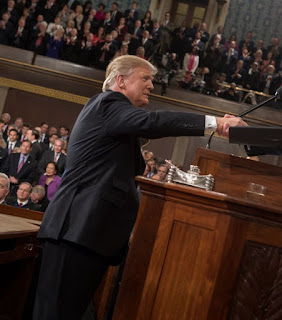 Mango Mussolini knows he isn't very well liked, though he tries to tell his supporters it's all "fake news" and whatnot. Like almost every president in modern times, when he spoke at the State of the Union, some or many members of the opposition party didn't applaud. Frankly I don't blame Congressional Democrats for not doing so, I certainly would have issues applauding the words of an orange lunatic who tells more lies than truths. But Trump called them all "un-American" and "treasonous" as a result. I remember full well how awful Republicans treated President Obama (including shouting "you lie" during a State of the Union) but Obama kept it classy. These same Republicans called Obama a "tyrant" even though all he did was sign executive orders to not change a law but change the way his government operated. If Trump is saying this stuff when he has all the power, what is he going to do when Democrats take back the Senate and perhaps even in the House in mid-terms? Once again I apologize to the rest of the world (except Russia) for this horrible excuse of a man we have in the oval office.
Posted by Adam at 10:28 PM

He grow more despotic by the day. Frightening.

UGH...this man. It's not a dictatorship. In a free society, you should have the right to applaud or not.

Just when you think the Cheeto can't out-stupid himself, he proves the world wrong. When I first saw that news that he said this, I honestly thought it was a joke, but hey, it's Trump! Why would anyone think there's a semblance of sanity anymore in this administration?!?!

Nothing he does or says surprises me anymore. Now he wants a military parade in his honor. His supporters will lap it up I'm sure. Ugh.

When I saw the clip of him saying this crap, I wondered if the men behind him were paid to dress down and stand there.

Never have I witnessed such a circus as his "Address to the Nation".
Jumping Jackasses in the room............I am sure from the look
on the House Speaker's face at times, he was wondering when the bloody clown would shut up.
Well you Yanks voted him in so suffer the consequences until you have "THE BALLS" to oust the bastard.
Retire him (in chains of course) to a Luddock like place or one of those stupid Springfields that the US has scattered hither and thither.
His address was on TV here and the commentary after by Australian
correspondents and US Aussie based ones would have had Turnip Top in a rage - ha ha!
Colin

I actually agree with you on this one - Trump's rhetoric is that of a petty dictator. But I'm not as confident about the Democrats taking back the senate, let alone the house, unless they can come up with a message that resonates, instead of just being the anti-Trump party.

Trump is tearing all our institutions down. I'll be doing a lot of campaigning next fall.

It definitely was a very petty thing to spout off. I really wish they would just tell everyone to hold their applause (or lack of) until the end. My nerves were already grated 5 minutes in when by that time we had already seen 4 minutes of standing and clapping. Get your damn speech done and over with without the fanfare.