Donald Trump Say's He'd Would Have Stopped Someone like Nikolas Cruz 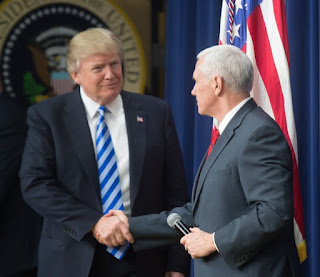 Gun nuts are scared they might lose some of their "rights", so Donald Trump has to say some thing to make everyone forget the real issue. While the NRA says only a "good guy with a gun" can stop a villain, the lone police officer stationed at the school failed to do anything which proves that this theory doesn't meet reality. While I can't exactly blame him for being scared (horribly outmatched in firepower there), the officer did become a coward in that situation. However Donald Trump, as smug as he is, says he would have taken someone like Cruz down even if he was unarmed. Really Cadet Bone Spurs? I'd imagine you would have run chicken down to the nearest McDonald's.
Posted by Adam at 11:30 AM

" Those who are confident without knowledge are really not courageous, but mad."
Socrates

Nutball through and through. Probably would have pissed himself as he ran

Yeah, okay... He would have run away or found a place to hide.

Very brave?????????????????
Funny, how he was NOT so brave with being conscripted during the Vietnam fiasco.
Thankfully there are some governors in the USA that think this is nuts, he is nuts and that arming teachers is the maddest of ideas ever to come out of 1600 Penn Ave. Then again Penn Ave has never had such a nutty resident before in its history.

Oh yes where are the old Tea Party mob these days........down in the depths of the gopher holes of Texas, Tennessee etc???????

The lunacy emanating from the US these days ( Washington) goes from mad to madder by the minute. I wonder what the State Department professionals think of the TURNIP TOP kids now taking over diplomatic roles??????????????????????

Answer this DJ, LV and co.

Well, I'm agreeing with Huggybear. That was the nuttiest thing Trump could say... well maybe not. He's so full of craziness that I can't even compare them all. And arming teachers? Are you serious? Where would that teacher carry that gun so the kids don't get near it?