Fact of the Day: Audie Murphy 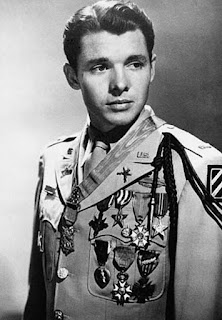 Audie Murphy was a soldier during World War II who earned every combat award for valor by the U.S. Army along with awards from France and Belgium. He earned the Medal of Honor by holding off an entire German company and leading a counterattack while wounded and low on ammunition. After the war he became an actor, but died in 1971 during a small plane crash.
Posted by Adam at 12:30 AM

What a career! From military to actor.

Interesting!! a soldier become an actor. But as a soldier he achieved so much .
https://clickbystyle.blogspot.in/

Survive all of that and then a crash at home. Life can sure think itself humorous sometimes, even if it is a...

I remember my parents talking about him. I didn't realize that he died in a small plane accident.

When I hear of people like him, I always think, WTF have I been doing with my life?

Sad ending for a grave man.

Thank for providing good information for site,Thanks for your sharing.

A chestful of medals alright!

Did not know he died in a plane crash. Ironic.

Wow, all those medals!

I know this actor well from reading about him. he is a true hero but he suffered from severe PTSD or battle fatigue as it was called back then. He became an alcoholic and had many troubles....I felt so bad for him

I remember watching him in movies. He had a sorrowful look to him, I recall. They made a movie, starring him, about that war event. That must've been hard for him, reliving it again over and over as they filmed him.

It's sad to think of all he survived in WW II and then know he died in a small plane accident ~ and so young. I remember him from his film career.