Fact of the Day: Katyn Massacre 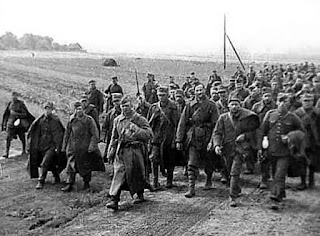 The Katyn Massacre was the mass murder of Polish nationals during the spring of 1940 during World War Two by the Soviet Union's NKVD agency. Germans had discovered the remains in 1943, but the Soviets denied this and blamed it on them. Russia officially accepted the blame in 1990. The massacre killed an estimated 22,000 people.
Posted by Adam at 12:00 AM

I'd never heard of this massacre. A lot of people killed, that's tragic and very sad.

Poland has had more than its share of suffering and even inflicting suffering over the years. The history of WWII is horrific.

Never heard of this, but that is so horrible!

Horrible in every way indeed

The Polish are beaten in every way.

My father's family came here from Poland in the 19th century and missed the horrors that came later. I was fortunate enough to visit this beautiful country last year and there are reminders everywhere of the atrocities that occurred.

I recall this from the news and had read about it. The Russian Army was one of the worst for such atrocities right after the war and, obviously, before. It is so very sad

Don't they teach history where you live?
It was one of the worst massacres of WW2 and initially
the Germans were blamed for it. A brilliant bit of lies
by the then Soviet Union.
Colin

So the bloodthirsty Nazis got the goods on the bloodthrsty Stalinists.