Fact of the Day: King and Queen of Ireland 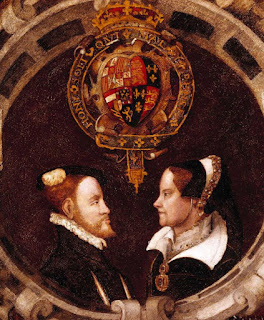 King Henry II of England was made Lord of Ireland instead of King as the Pope had granted him this "honor" officially despite an invasion through force made it so regardless. When King Henry VIII broke away from the Catholic Church he made himself officially king instead of lord when it came to Ireland. When his Catholic daughter Mary took the throne, the Pope had no issues recognizing her as Queen of Ireland and her husband Phillip as King of Ireland instead of Lady and Lord.
Posted by Adam at 12:00 AM

The good thing is, they don't have a king & queen at all, lucky Irish.

Guess time mellowed him or some other religious mumbo jumbo

Before nationalism borders and rulers changed often and with a lot of blood shed. they were very harsh even with their own family all in the name of power.

So much history. And so much drama.

I did not know this! I'm sure the Irish were pissed off, though, no matter what the English sovereign was called.

Ahh the drama and intrigue of the Monarchy