Fact of the Day: King Kaiser 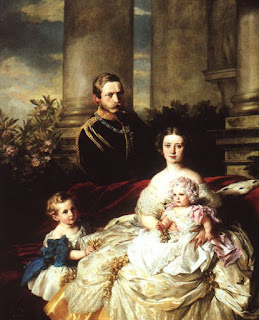 While English/British law always favored male heirs to princesses, there have been reigning Queens when all direct male heirs were either dead or non-existent. If the right to the throne passed through the eldest child regardless of gender when Queen Victoria reigned, her daughter Princess Victoria would have been Queen briefly before her own death. However, her son Wilhelm II (better known as the Kaiser of World War I) would have taken the throne after her.
Posted by Adam at 12:00 AM

Those poor royals and having to decide who gets the thrown

Or throne, both work lol

Lots of stuff going on back then for sure! Hugs...RO

If only it did pass to the rightful heirs regardless of gender.

I wonder how English monarchy will be like in the future. It does seem like the Queen will be around forever! (I quite like her though so I'm not complaining:P)

I'm glad that law has changed.

In 1914, Wilhelm would have had to declare war on himself.

Well, THAT would have screwed up World War I.

Love these historical tidbits of info!

Ahh yes.... All of them are related and if you look at the pictures of the King, The Kaiser and the Tzar around 1914, you can see they are related.