Fact of the Day: Southern Shameful 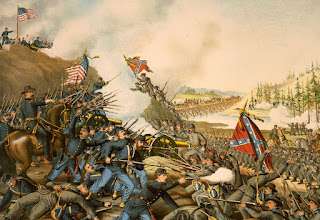 While supporters of the Confederate States of America argue that the Civil War was about "independence", the rebel army didn't stay just in the South on "defense". They made notable raids up north (mostly in Pennsylvania) causing destruction and even kidnapping of African-Americans (mostly free-men) and sending them south to be slaves.
Posted by Adam at 1:06 AM

Email ThisBlogThis!Share to TwitterShare to FacebookShare to Pinterest
Labels: civil war, fact of the day, politics

When we lived in Washington DC we decided to tour some plantations in Virginia. I was appalled when the docent in one place called it "The War of Northern Aggression" -- apparently a popular and thought to be clever turn of phrase.

Always have to try and justify their acts

It's great that you share history points that may not be well known. Hugs...RO

A sad time in our history!

Wars are wars and unlikely events happen due to unforeseen circumstances.
I think a pretty reasonable TV/Movie account from both sides
can be seen on the trilogy - 3 series - North and South by John Jakes.
It is quite long - you won't watch it in one sitting as it covers the period:
1. Up to the war starting at West Point Academy and the introduction of both familes
2. The War
3. The Aftermath of the conflict.

I strongly recommend this series.
Colin

I suppose they need to believe this line. Otherwise, they'd have to accept that they and their ancestors have been living lies.