Fact of the Day: Thomas Cranmer 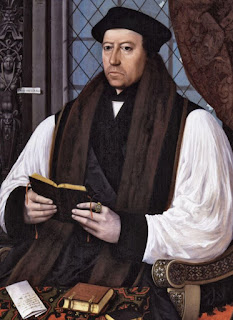 Thomas Cranmer was the first Protestant Archbishop of Canterbury, serving under King Henry VIII. After his surprise appointment to the role of Archbishop, Cranmer helped the King in his matter of annulling his marriage to Queen Catherine. Unlike many others who served King Henry VIII, he never lost his head through his reign and helped his son Edward VI make major reforms in the Anglican church. However when the Catholic Mary I took the throne, he was convicted of heresy and treason. While he seemed to have recanted his views and made peace with the Catholic church in his final days (under pressure of the Catholics who hated him) on the day of his execution he reversed that stance and rejected the Pope before he was burnt to death.
Posted by Adam at 12:00 AM

Damn, may as well curse them when you are doomed anyway I suppose

They did some very mean and cruel things to each other at that time.

I'm surprised he didn't flee the country when Queen Mary came to the throne.

Holy Moly! I’m not surprised by all the diabolical plots of that time. I like it that he condemned the Catholic Church before he died...he went by his conviction

Wow! It is amazing what happens (still) to those who wish to persecute others for their religious beliefs. Great fact today, Adam.

Not a good time in history to be rich and famous. Better to be poor back then, when you only had smallpox and the plague to worry about.

Good for him! Not giving the Pope the satisfaction of being thought of as the Big Man.

He was an opportunist bastard of the highest degree.
A perfect candidate for your present day lunatic leader's cabinet.

Not bang bang anymore - but ratter tat tat - sounds more AK machine gun like!
Go the students of the USA - give the NRA, the ratbags and bigots HELL.
Colin