Fact of the Day: Turkish Potatoes 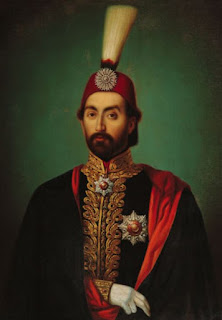 Sultan of the Ottoman Empire Abdulmejid I considered giving Irish people a notable amount of aid during the Irish Potato Famine which eventually claimed over a million lives and the emigration of another million Irish people. British officials convinced him to lower that number drastically as it would have overshadowed a more modest amount from Queen Victoria.
Posted by Adam at 12:00 AM

How pitiful is that? Some things never change. I would dearly love to visit Turkey! All the best this weekend to you and Daisy!

Interesting detail! I just recently found out that tomatoes came to Europe from the States (to where they originally came from South America). I couldn't believe it! Also, I had no idea that basil was originally an Arabic spice! The world is full of surprises! Thank you for stopping by my blog, and leaving me such a kind comment :)

What a bunch of stick up their butt royal aholes

We always learn something new !!

Wow, that is awful!

Ack! Even then, rulers are more concerned about their reputation than the people they ruled over:(

Well the Brits then had an Empire. Fancy the Turks upstaging the "Establishment". Wicked Sultan - tut tut.

Wow! How sad is that that image takes priority over life.

We are not amused.