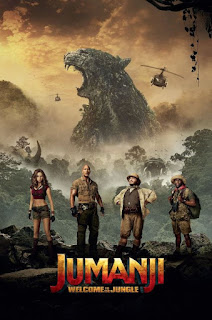 I remember the original Jumanji film back in the 1990's with Robin Williams, and it was one my favorite films of my childhood. When I first heard of this sequel (originally thought it was going to be a "remake") I thought it'd be a huge train-wreck. But when it came out in late December of last year, word was actually surprisingly good. It did really well at the box office, it even dethroned Star Wars: The Last Jedi from the top spot for one week. Daisy wanted to hang out with her friend this previous Monday night but we were both off. I suggested we all go see a movie, and Jumanji 2 was really the only thing I had much interest in seeing at the moment. 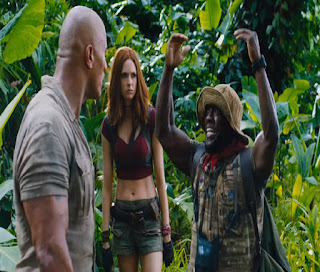 The film takes place after the events of the first film. You don't see any of the old characters like Alan Parrish or the Shepard siblings, but the Jumanji game-board transforms itself into a video game console in order to lure unexpecting pawns to play the crazy "game". A group of students find it in the school storage room and play it. Before they know it, they are transported into the game itself. They all start to freak out as they realize that none of them look like what they do in real life. 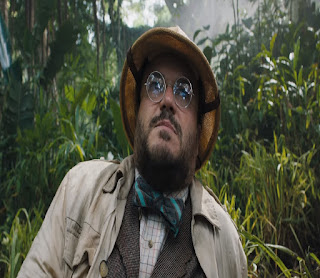 The nerdy Spencer Gilpin becomes the muscular Dr. Smolder Bravestone. The football jock Anthony "Fridge" Johnson becomes the zoologist and weapons-expert Franklin "Mouse" Finbar. The shy Martha Kaply becomes a gorgeous redhead (and fight expert) named Ruby Roundhouse. And the pretty popular blonde Bethany Walker becomes the fat middle-aged man (to her horror and shock) named Professor Sheldon "Shelly" Oberon. They know they have to finish the "game" of Jumanji before they can go home. But Spencer realizes they only have three lives, and once they are up, it's a very fatal game over. 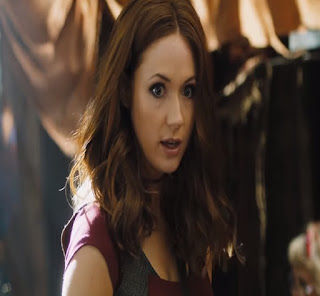 I can actually see why Jumanji: Welcome to the Jungle surprised us all. As an action film, it's rather okay, but the comedy in the film is very likable. I think Jack Black especially did a wonderful job, you honestly could believe that there was a preppy blonde in his "avatar" and that led to some comedy gold. I will say that the two Jumanji movies feel like much different films, but I like them both. However I do still heavily prefer the original than the sequel. That being said, I hope they don't make another sequel, they might have lucked out with this one but I can't really seeing a third movie being that good.

We loved this movie (the original one too). Can't go wrong with the Rock. Cake and speed as a weakness..haha great!!

Very useful post! Thanks for sharing :)
I followed you, olease visit my blog, and if you want follow me too :)

Now I want to see Jumanji. Glad to hear it's not a remake. The original was so stressful for me to watch. That's how good it was.

Another sequel has already been green lit

My Rare One saw this movie. Now she LOVES Jack Black.

Great review! I'm a fan of Jack Black, Dwayne Johnson and Kevin Hart. Despite that, I was a little iffy on checking this out. Sounds like I need to add this to my already massive list of movies to see this year. (lol) Hugs...RO

I never saw the first one, but I am intrigued by this one. I like Dwayne Johnson:)
Happy Valentine's Day:_)

I loved both versions. While I think The Rock was supposed to be the main draw, Jack's comedy really made the show for me. He was a hoot!