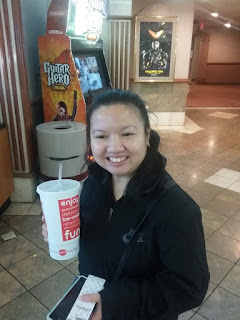 This was last night as Daisy and I saw a movie with her friend Amy from work. Unlike some areas of the country, we never had an AMC until recently. We had a dollar theater by Carmike but they recently were acquired by AMC. Except they made it a "regular theater" but they did renovate a bit as the Carmike was starting to show its age.
Posted by Adam at 3:44 PM

What movie did you see?

Haven't been to a pictures for many a year.
Daisy is looking good.

How nice that you got out. We haven't been to a movie theater in ages. We're way overdue!

We wanna know what movie? :D

I like our AMC. The seats are reclining and so comfy. Hope you enjoyed the show!

Coming by to say Happy Valentine's Day to you and your adorable Daisy...