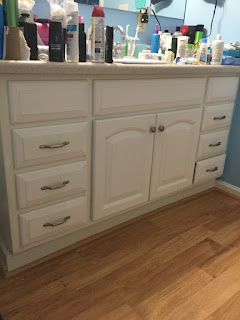 Since I got the bathroom itself painted, I knew the time would come to paint the vanities. They came probably factory made, so I can't really blame the previous home-owners on that one. The master bathroom's vanity cabinet wasn't too bad but there were some gunk stains that were impossible to clean off. 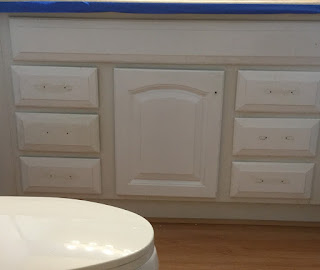 The spare bathroom was worse, it looked like a water stain of some kind was on it. Which was pretty much from the previous owners because we only spent a week in this bathroom while painting the other. 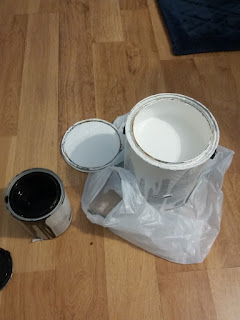 I had almost a full gallon of primer left, so I used a little bit of black paint to tint it gray to make it cover better. It's Bullseye 123 Plus and it's got a pretty good bond and great stain-blocking. 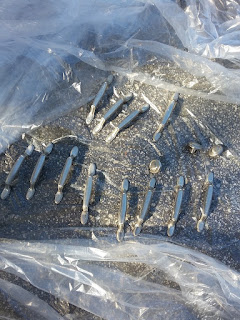 As I took off the knobs I noticed some of them weren't up to par. I decided to spray paint them instead. These were pretty easy to spray paint as they're small and light-weight. Just took them out in the driveway on some plastic and that was very simple and quick. They were satin nickel I think. 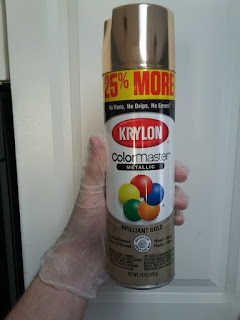 But my wife Daisy wanted them gold so we got some Krylon spray metallic in brilliant gold. It covered and bonded really awesome. I was really impressed. I knew this beforehand, but the cap is a good bit lighter than what it actually turns out. 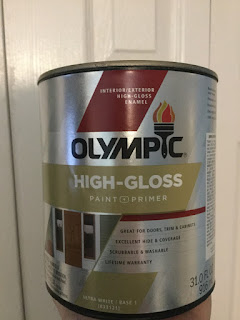 As for the paint of the whole thing, we chose a quart of Olympic Interior and Exterior High Gloss which is a water-based latex paint + primer. I used white on the baseboards in the house and had good results out of it. I wanted high gloss as it's really durable. We had it tinted to Gray Timber Wolf (2126-50) by Benjamin Moore. It seemed to be a pretty true gray and that's what Daisy wanted. 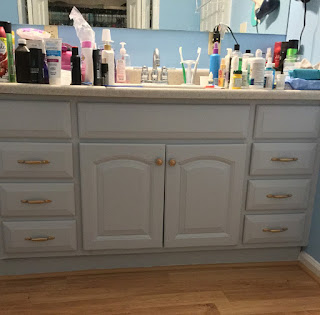 But here's the finished result on the master bathroom. Despite taking out the drawers and removing the hardware, painting both vanity cabinets were much easier than painting a whole room.
Posted by Adam at 5:00 PM

Very pretty. It's good to know that paint will cover gunk and water stains. I might paint the bathroom vanity then.

It looks great. And I love that a paint would have the name 'Gray Timber Wolf'. That is pretty cool :)

The gold looks nice on the gray

Better than new. What an improvement!