Question: When Did You Stop Watching VHS? 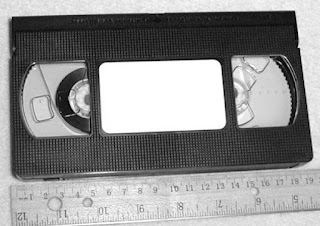 For the majority of the 1980's and 1990's, VCRs were king of the media wars. By the early 2000's, VHS tapes were quickly made obsolete by DVDs. While did use them a lot (especially to tape my favorite shows) I think I finally went DVD-only in maybe 2003 give or take. When Blu-Ray arrived shortly afterward, I do admit I did feel like I was being outpaced by technology.

Don't remember exactly when, but it has been quite a while.

A long time ago. My mom however hung onto all our VHS movies we watched as kids. I am sure she has a VHS player somewhere. The dayhome my son attended a couple years ago still used VHS to put on kids movies.

when the kids were little (about 10 years) they had all the Disney pictures in VHS.

I still have a VCR and some VHS tapes but don't use it.

early 2000's they were tossed/sold at our sea

When DVD players came out, I got a combo DVD/VCR player so that I could still use it for VHS tapes too. I still have it, but rarely put a tape in it anymore. I think I'm about to toss all my VHS tapes .

That's a good question. I honestly don't remember. It's been so long!

I still watch VHS tapes! We found this old Sony VHS player in our basement and my mom kept all the tapes I had from my childhood so she gave some to me.:D

Probably in 2001 because my daughter was 2 and we started swapping out vhs for dvds once she started showing interest in films.

I can't remember exactly. We had two Sony TVs with built-in VCR players but we also bought a DVD player to connect to one of those; maybe as late as 2009.

I still have my VCR but haven't watched it in years. I won a DVD player at work in about 2005, and still have it, but now the sound doesn't work on it, so I just watch a DVD on my computer.

Believe it or not, I still watch plain old free-of-charge broadcast TV more than anything. Usually PBS.