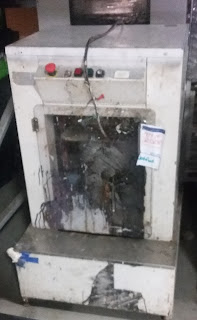 As I mentioned before, I work in a paint department. 5 gallon paint shakers are key in having a successful day, and we have a standard set of two. After awhile you learn which one is the "good" shaker and which one is the "bad" shaker. This baby here was a horrible machine, it'd work most of the time but when it didn't... Let's just say that it would often throw stuff out and make a large bang noise. Not a mess with a five gallon bucket with a tight lid, but if someone puts one gallons in there, well it's going to be a long time to clean up. 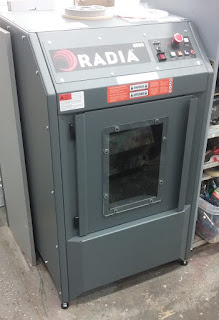 So after over three years of working there, they finally replaced it with a new version. Had no issues of it so far. Also has a nice roller bar that helps slide those big giant buckets in there. Some repair guy found out recently that the broken machine was made in like the early 1990's which was concerning since our location has only existed a little over ten years.
Posted by Adam at 12:00 PM

At least they have finally replaced it!

I can imagine that old paint shaker being a very important detail in a mystery story.

I've seen these in Home Depot.

Glad it got replaced finally.

oh man..I remember those ole shakers..one of my employees didn't put the lid on tight..omfg..

Always nice to have good equipment at work.

That's a lot of years for a machine like that. Just imagine the colors of THAT explosion.