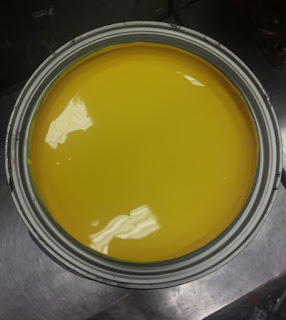 Back in my first year and half working in paint, we had a horrid co-worker named Tisha. After over three years of working in paint, I've seen practically every color shade you could imagine. Some of the dumbest choices too, but if the person wants it, then that's what they want. We had one lady get enough gallons to paint her whole house and they weren't neutral they were all pretty vibrant. Tisha was bold enough to ask her if they were going to go in a daycare, the lady's face wasn't too happy from the insult. I had another lady tell me that Tisha told her that she had picked out the wrong colors. There is no such thing as a wrong color really, it's all subjective. Eventually Tisha quit to get married (poor guy), and I really hope we never see her again.
Posted by Adam at 12:00 PM

Some believe are missing the tact gene :)

Some folks are simply "just that way."

I thought her daycare comment was pretty funny actually (if tactless).

Thanks for the slice of life

She sounds like the idiot who refused to mix me the white paint from the chip I gave her because according to her "all whites are the same". They sure as hell aren't, but thankfully I found someone else who mixed my paint the way I needed it and agreed with me that there's a difference in shades.

Wonder what colors Tisha painted her house. I'm sure they're all wrong.

If someone talked like that to me, I'd tell them I'm taking my business elsewhere.

I get a kick out of your paint people stories, Adam!