Fact of the Day: English Elizabeth and Scottish Mary 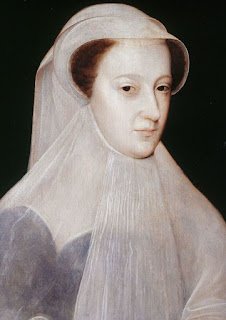 Mary, Queen of Scots and Queen Elizabeth I of England had one of the most bitter rivalries in the history of the English/British monarchy. They were also first cousins-once removed (both descended from King Henry VII) but despite the political hatred and drama of the two (which ended up having Mary executed) the two apparently never met in person.
Posted by Adam at 12:00 AM

Never meet each other, one way to kill.

Kinda the precursor to internet trolls

I just watched a documentary on the Coronation Crown of England -- at the top, it has four tear-drop pearls which were once earrings of Elizabeth I and Mary Queen of Scots.

We read the works about that in school, what a story!

Maybe if they'd just gotten to know each other...

Plots, counter plots and beheadings!
Well we don't have the beheadings so much these days
but Turnip Top is carrying on all this history!
All very amusing Adam.