Fact of the Day: Hattie McDaniel 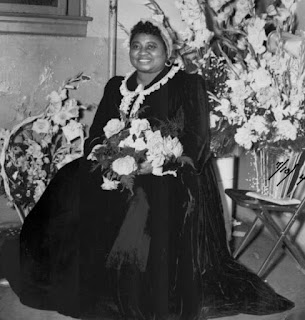 Hattie McDaniel was the first African-American to win an Oscar, but she almost wasn't able to pick up her Academy Award in person. The awards were held at the Ambassador Hotel in Los Angeles which at the time had a racist policy towards people of color. Hollywood producer David O. Selznick called in a favor just to have her be able to attend.
Posted by Adam at 12:28 AM

Email ThisBlogThis!Share to TwitterShare to FacebookShare to Pinterest
Labels: California, fact of the day

Just as well as he did.

The country has come a long way but still has so far to go.

Pathetic such a thing had to be done, but good she got in.

Such a sad situation. Hugs...RO

So sorry for her.

See? That kind of crap didn't just go on in the Jim Crow South.

How awful. Very sad that it was that way.

wow was that Gone with the Wind?

Yup, Christine, That was for GWTW and she gave a very sweet speech. She is one of my favourite actresses who, despite the maid roles etc..., helped bridge that horrible gap so that African Americans, now, can play lead roles

Imagine that - winning an Oscar and than not be allowed to pick it up!

She was so wonderful as Mammy, I have always loved Gone With The Wind.

How many years (decades) was it before another black actor won an Oscar?

Wow. That is so sad.

She was such an amazing actress! Her performance in Gone with the Wind is amazing.

Hattie was so awesome in Gone With The WInd. I've seen that movie so many times....such a classic.

I'm so glad she was able to attend, but know that we still have a ways to go to recognize the prejudice that is still there and now showing its ugly head with the current administration.

I remember reading about that. Isn't it awful how things were back then? Thank God we have come a long, long way! xo Diana