Fact of the Day: Pope Pius V and Queen Elizabeth I 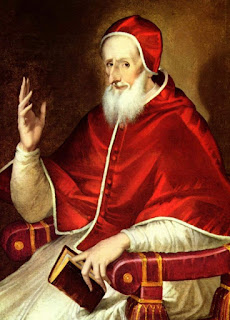 While never a Catholic (despite attempts by her sister Mary I) Queen Elizabeth I was officially excommunicated by Pope Pius V. With the order, the Pope declared that all Catholics in England were free of allegiance to Elizabeth I. It even went steps further and excommunicated any Catholic loyal to the Protestant Queen.
Posted by Adam at 12:00 AM

That's interesting and I didn't know that info.

Religion once more at play, ugg

Elizabeth I was officially excommunicated by Pope Pius V? See, THAT I didn't know. Did he lose his mind or also his head?