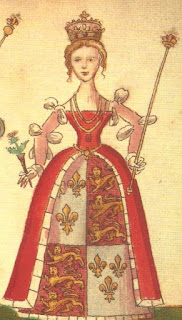 Joan Beaufort was in a way unlikely to be the consort to any monarch. Her father John Beaufort (grandson of King Edward III of England) was originally born a bastard, but he was legitimatized when his parents eventually married. When King James I of Scotland became a prisoner of King Henry IV of England (Joan's half-uncle), King James I was freed on the condition that he married Joan. While political, King James I apparently was impressed by her beauty, and they did have many heirs including the future King James II of Scotland.
Posted by Adam at 12:00 AM

You do find the most interesting historical facts.

Some have it, while the others have to slave.

Quite a career, I would say!

Sure quite the roundabout way

Fate brought about true love. Pretty cool that you know all these facts. Hugs...RO

So many royals. It's hard to keep track of everything.

Get a Get Out of Jail Free card by marrying a beauty. Sounds like a deal to me!