Fact of the Day: Sibylle of Cleves 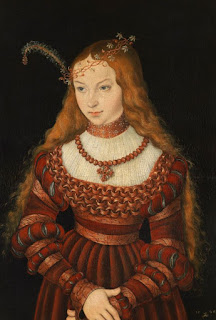 While not as famous as her sister Anne of Cleves (fourth wife of King Henry VIII of England), Sibylle married the Elector of Saxony (Holy Roman Empire/Modern day Germany) which was definitely a lower rank that what her sister had gotten. However through many generations, her lineage ended up in the royal houses of Great Britain such as through Queen Victoria's husband Prince Albert who was a direct male-line descendant of her son Johann Wilhelm, Duke of Saxe-Weimar.
Posted by Adam at 10:33 AM

Interesting! Never occurred to me that Anne of Cleves had a sister, but of course she probably had many siblings.