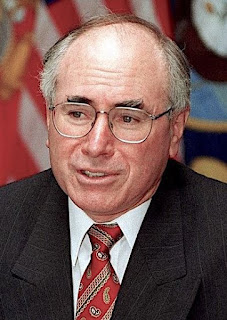 "The most important civil liberty... is to stay alive and to be free from violence and death."

John Howard was Australia's Prime Minister from 1996-2007. During his tenure, Australia had a gun massacre and instead of letting the gun lobby convince politicians to do nothing, they implemented gun control and they haven't had a firearms massacre since. Now this civil liberty here is virtually impossible to guarantee, but it does anger me that our politicians have betrayed us countless times for the sake of the gun industry. Howard is actually a right-winger, in the United States he'd almost certainly be a Republican, but even he has common sense on this issue.
Posted by Adam at 12:00 PM

Even if the government did take guns away from most people I think there would still be a big black market and it would be hard if not impossible to get guns off the streets.

It WORKED far better than YOU give credit to,
We have nothing like your mob roaming streets, schools etc
with guns and NO WAY would you find a school here with a gun-totting teacher.
Think AGAIN Ms Kirkand.
Colin

The Howard government was NOT RIGHT WING - get your bloody facts straight Adam. It was Centre Right.
John Howard did however get on well with George Bush Jnr. Also with Bill Clinton and Barack Obama when they visited Australia.
Colin

While I am not opposed to my neighbors exercising their right to bear arms, I do think we are in desperate need of some kind of reform. Take them away completely, I would not support that. Twice I've had to call the police to my home in an emergency situation and twice it took them 30 minutes to arrive. My neighbors can get here in under a minute. And yes, the 3 surrounding houses are either current or ex-law enforcement or ex-military, so they are properly trained in how to use firearms. In another emergency situation, I would call them before 911.

I admire Australia for what it accomplished with gun control. We absolutely need reforms.

I was an elementary teacher, and I would have quit my job the moment teachers were armed with guns. Lunacy!