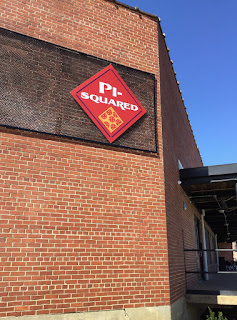 The other day we went to Pi-Squared Pizza in Spartanburg in the Drayton Mills neighborhood. It was one of the hardest restaurants I ever had to find. It's actually built in one of the old mill buildings, so it doesn't stand out like a typical eatery would. The first one in our county was in Boiling Springs, but this one was way closer to our house. 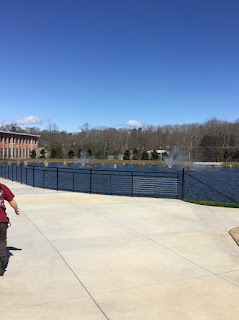 It's a semi-long walk to the actual door though. But you could see the Drayton Mill pond easily on the way there and you can also see it through the window which is a pretty nice view. 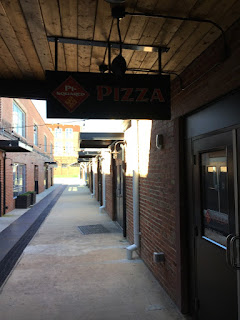 The restaurant itself is actually much farther than you'd imagine from the initial sign. But that wasn't a big deal for me. 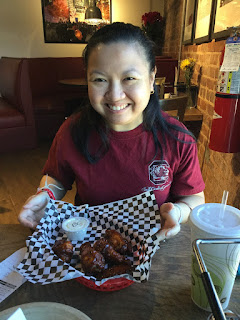 My wife Daisy got herself some chicken wings. She's always happy and she ate them within a reasonable time. 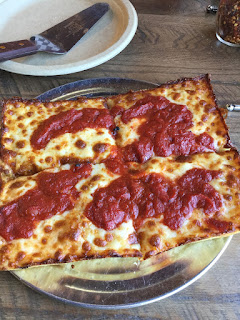 I got a small square-shaped cheese "Detroit-style" pizza. I asked for extra sauce as I hate a dry pizza, and I was not expecting it to be on top of the cheese instead of below it. This really threw me off, and I did not like this idea. I had to take a fork and spread it across to even it all out. Apparently this is the way all pizzas are done here. As for the pizza as a whole, it's okay by restaurant standards, but I wasn't too impressed for the reasons stated above. We probably won't ever return as I have better choices for pizza and this would never be my first pick.
Posted by Adam at 12:00 PM

Oh...that is weird that they do that with the sauce. I've never seen that before.

Do you have the kind of pizza place that you pick all your toppings and crust type and watch them make it before they fire it in a wood oven? I love those places.

I would not like that either, Adam, with the sauce flipped on top of it over the cheese---weird! I don't like dry pizza either. Hope Daisy's wings were good!

I wouldn't like the sauce that way either. Well, at least you tried something new.

My God - the fast food outlets of Spartanburg won't go broke with you and Daisy and friends ( or likewise foodies for junk food).
They mush have smiles the width of the Mississippi when they see you approaching.
Colin

Poor Adam, for sure this is unusual.

I don't like the sauce on the top. I would think it would make it much messier to eat without the cheese trapping it to the bread.