Question: Would You Prefer Disney's Queen Elsa to Have a Girlfriend? 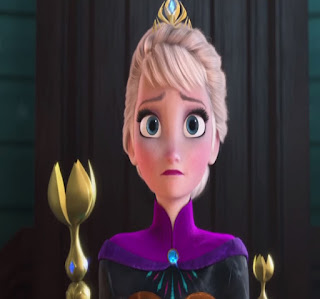 It's been five years since Frozen hit theaters, and while the little ones are still singing "Let it Go", it's about time for the sequel to finally materialize. While kind of a spoiler (if they aren't bluffing), Frozen 2's co-director Jennifer Lee (who also co-wrote the story for Zootopia) mentioned that Elsa having a female love-interest was more than a possibility in the new sequel. Being super-liberal, this doesn't bother me at all on a personal level, and I always love when plots in entertainment take routes that are not plain boring vanilla. While there has been many LGBT characters in all realms of fiction, this would probably be the first major character in Disney animated history to be so.

Would you like to see the story go this way?
Posted by Adam at 12:00 PM

Hmm...I suppose that would be ok with me.

I think that would be pretty cool actually, although I don't really mind when Disney stories don't have a romantic story, you know? I thought Brave and Moana were really well done!

I wouldn't have a problem with that.

You KNOW I'd approve! Yay, Elsa!

I think it's about time.

As my daughter is a part of the LGBT community, I would support it. However, I don't think it would happen. We have too many bigoted idiots that would boycott the film and Disney is all about the mighty dollar.

It's no problem for me!