Rex Tillerson Out as Trump's Secretary of State 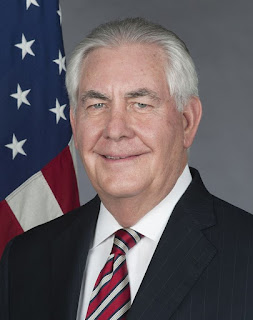 Many industries are well known for high-turn over due to workers either not liking (or getting fired from) their jobs, but I don't think there are many fields that are lasting as little as a role in the Trump Cabinet. Rex Tillerson is now out as Sec. of State, which I'm surprised didn't happen after it was leaked that he called Trump a moron in frustration. But he just recently blamed Russia over something, and Trump's BFF Vladimir Putin can't tolerate that. 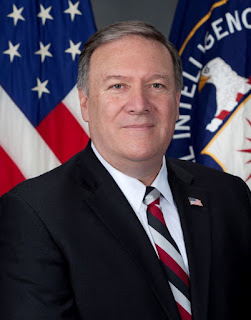 He will be replaced by CIA director Mike Pompeo, whom was originally a Republican congressman (serving Kansas's 4th district) who got elected in the Tea Party movement elections in 2010. While he stayed rather low-key for his far-right politics, I don't expect miracles from him.
Posted by Adam at 11:30 PM

Pompeo will not last in this position either. Seriously...when is the impeachment? It is mind-boggling how he's still in power! Mind you....Canadian politics is not much better....sigh....

This is the craziest thing yet in this erratic administration.
Tillerson replaced by a TEA PARTY CLOWN.????????????????
The diplomatic corps around the World must be doubled up with laughter and also scared shitless with this peanut brain as Sec. of State.
And the rudeness - dismissed by TWITTER!
Seems that Foreign Ministers around the World read the TWEET before the then Secretary of State knew.
Rudeness and stupidity of the highest order..........and where was TURNIP TOP when this was going on.........in California viewing "examples of Walls to go up".
YEP to keep you all in................who in their right mind would want to visit the USA these days.
Further..........good on those school kids protesting this crazy gun business outside the WHITE HOUSE - or should that be renamed " THE HOUSE OF STUPIDITY".??
Colin

Pompeo - or should that be Pompeii!
Top blowing may be the order of the day.
Hope DJ (Sassy Sue) and the Tea Party Matrons must be "over the moon" -hopefully spinning around in space and never to be sighted or heard of again.
Colin

So much drama going on.

From bad to worse.