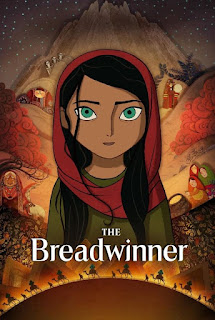 I didn't hear of The Breadwinner until fairly recently. I'm always a sucker for animated films, and this one sure didn't look like the average one. Instead of being a typical "family-friendly" animated film, it's really a more realistic tale of a horrid society/regime that reigned in Afghanistan from 1996-2001. The movie is based on the book of the same name by Deborah Ellis, and she based the story on real-life accounts that she heard from refugees. The movie was nominated for the Oscar for Best Animated Picture as well. 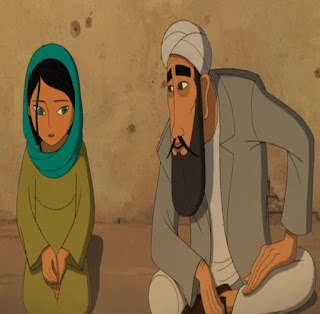 The movie's protagonist is a young girl named Parvana. Her father Nurullah was an teacher, but he lost his leg in a war against the Soviets, and now in a Taliban-controlled Afghanistan, he is reduced to offering illiterate people to read or write for them to make a living. However a young extremist thirsty for real power, picks a quarrel with him for no apparent reason. He tries to ask for Parvana's hand in marriage, but her father (knowing better that the young man is no good) tells a lie. The young man figures out the truth, and gets petty revenge by having Nurullah arrested. 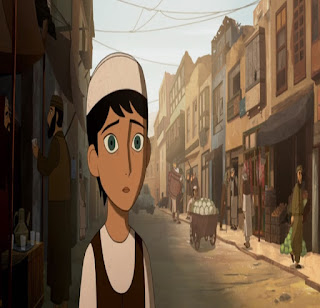 With no male relatives, Parvana can't even get food without being forced back into the family home by the cruel "peacekeepers". With her family dying of starvation, she decides to cut her hair and pretend to be a boy by dressing in her deceased older brother's clothes. The plan goes okay at first, but Parvana realizes this is much tougher than it seems. While she is able to bring food to the family table, she really wants her father back and will risk her own life to do so. 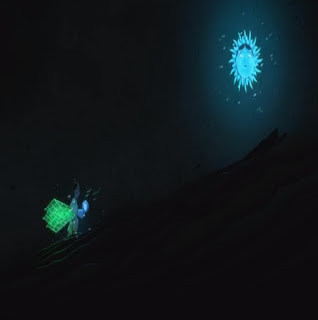 Overall I was a bit disappointed by The Breadwinner. The story is semi-grim, so it kind of depresses me a little which does usually impact me negatively. But it's a good story and the animation (including the "story" dream-like scenes) are pretty good. But I can see why it easily lost the Oscar to Pixar's Coco. 2017 was a rather weak year for animation, so if it had been released at a different time, it probably wouldn't have made the list. But I don't regret watching it, it's a very enlightening tale of a culture that should have never existed.


Surprises me that this is animated, but it's also a creative way to get a story across. I need to check this one out. Hugs...RO

It sounds like a grim story indeed. And how horrific that this type of thing goes on in other parts of the world.

I've never even heard of this one.