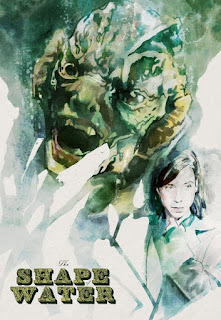 The Shape of Water is something I heard about last year. I'm not exactly a stranger to the works of Guillermo del Toro as I enjoyed both Pacific Rim and Pan's Labyrinth. The Shape of Water was nominated at the Oscars, and managed to luck out and win the nomination for Best Picture, Best Director, and two minor Oscars as well. Though the reaction among regular folks was far more mixed than critics, but what did I think of it? 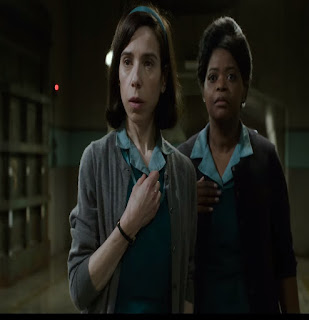 The film is about a mute woman named Elisa Esposito who works as a cleaner with her friend Zelda Delilah Fuller who often serves as Elisa's voice as she cannot talk. Elisa lives a very simple and plain life, but she works for a government lab, and while she's not exactly suppose to see anything important, it's hard to forget some of things she sees and hears go on. One of the top men at the lab runs out of a room heavily injured. Turns out they were keeping a big fish monster alive and using it as a guinea pig of sorts. 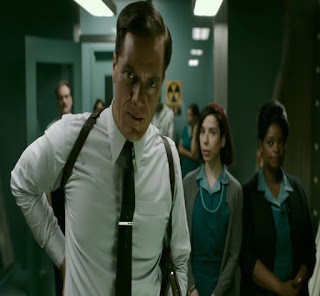 Elisa soon makes contact with the underwater beast who actually is very gentle with her. Elisa feels more connected with the Amphibian Man than most as she feels his situation isn't that different than her own. However the rather angry Colonel Richard Strickland sees this creature as nothing more than a beast. When it becomes clear he's not looking out for the living being's welfare, it's not just Elisa who will stand up for the beast's safety. 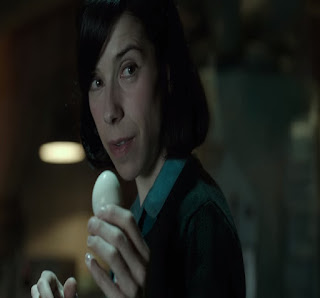 Overall I was quite a bit disappointed by The Shape of Water. Now that being said, it's quite well produced, directed, and acted. For those nostalgic for Old Hollywood and classic monster-movies, there's a lot of homages here. But like many have blurted out before, there is a romance between the human Elisa and the fish monster. And it's pretty dang weird, especially considering there isn't much human about the monster. So I did feel the bizarre relationship did drag down the overall story for me I'm afraid. Best Picture? Yeah... I don't think so in my book.

The movie certainly had its moments and had a very distinctive "look" to it, as well as an important message. I particularly liked how it mixed pop culture images from the 40s, 50s and 60s so you couldn't really tell what year or even decade it took place in. I think that was a commentary all in itself.

Actually, we liked it. And the romance between the two didn't bother us. I kept thinking she was actually like him since she was discovered an orphan at a river. I could have done without the violence though.

This is one I will watch eventually.

There were a few parts -- the dream of being in water at the beginning, the way her "scars" are revealed as gills in the end -- that one could take as hints that Elisa was actually unknowingly a member of the amphibian man's species who had taken human form somehow. This would make her sexual attraction to him more plausible.

Even aside from that, I felt that she stood for those many people who feel they don't fit in in this world and dream of being swept away to a different, better one. Most of us don't picture that better world as an amphibian world, but movies often operate on a symbolic level.

m4ufree movies - To communicate or not to communicate. Sometimes is just out of fear that we don't come close to the ones who can give us exactly what we need. They're different, let's stay away. Sally Hawkins in a magical but beautifully real performance invites us to try, to dare. Guillermo del Toro takes us through the paces with extraordinary delicacy and clarity of vision. Thank you.
See more:
fantastic beasts and where to find them megashare9
super troopers 2 putlockers
putlocker super troopers 2
daddy's home meaning
sicario putlocker